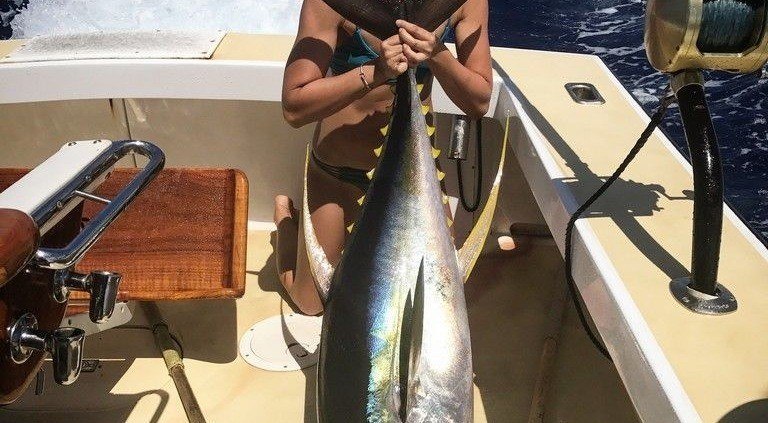 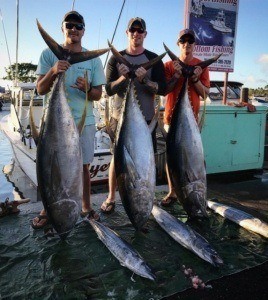 Yellowfin tuna also known as Ahi is the local fish of choice to catch. For hundreds of years, they’ve always been a rich source of protein for Hawaiians. In the past, Hawaii yellowfin tuna were caught from ancient canoes.  The traditional technique of catching Ahi involved using circle hooks made of bone and rock using woven rope hand lines. As the fish pulls, the hand lines burn through their hands and it felt like fire.  The burning sensation is what gave the yellowfin tuna its Hawaiian name of Ahi, translated as fire. Ahi sportfishing is still a favorite local pastime and when that time of year comes around when the big ones show up, people around here get the Ahi fever. All of a sudden people are calling in sick to work as boats on trailers go missing from driveways! 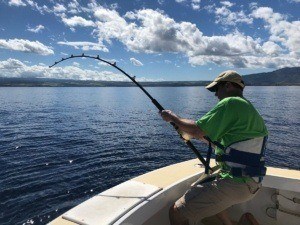 Every summer season I tend to get the Oahu Ahi fishing fever too. Generally, it will be in areas without much intense bird indication. We’ll troll these areas with lures and wait for the holes in the ocean where our lures just were. Super exciting, explosive bites out of nowhere. Single, double, triple, and even the five-banger bite of tuna over 100 pounds! May June July August is our most productive month for these size tuna but are caught year-round as well on our FAD buoys that the state places around all of the islands for fisherman. Fish agronomic devices are generally anchored in 1000 fathoms of water one fathom being 6 feet that’s some pretty deep water. These FADs create a structure at locations that these pelagic tuna travel. Generally, the fish on the FADs are smaller school size of fish ranging in the juvenile, 3-pound size all the way up to adult-sized 70-pound fish. 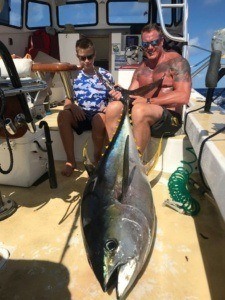 During the summer months that the big tuna show up, our Hawaii sportfishing charters catch them in the blind or in bird piles that usually range from 90 to 250 pounds each. Nothing like trolling along with the lures out half asleep, wondering what you’re doing and all of a sudden lines start snapping out of the outriggers and lines start screaming off the 130 size reels!  0-60 in an instant!  What a rush as your adrenaline level spikes through the roof!  Once that happens you’ll understand why we do this every day and why we have this addiction. Ahi tuna known for its delicious red oily meat is great for sashimi and local favorite, poke, a raw fish salad made with soy sauce, onion, sesame oil is a home favorite all around the islands. I feel like Hawaii is underestimated as being a top destination to catch these fish. I’ve had days of catching 10 of these Ahi fish over 150 pounds and basically had to stop fishing early because my anglers couldn’t reel another fish in. Super exciting when these fish turn on and start biting, to say the least.  They definitely make for some of my best memories on the ocean, creating bonds and friendships that I cherish to this day. Contact us today to find out more about our Oahu fishing charters.