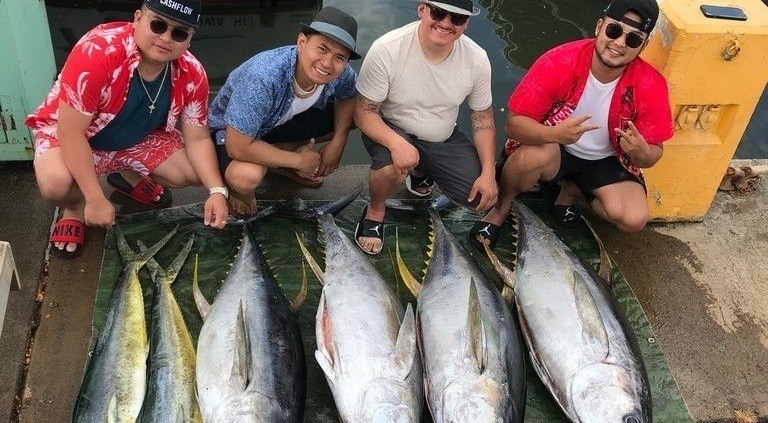 At Flyer Sportfishing, we pride ourselves on giving you the best deep-sea fishing experience in Oahu. We give you the resources to have a great time. Instead of using pen and paper, use your fishing rod out on the open water to create a memorable tale.

Speaking of memorable tales, there are numerous interesting Hawaiian legends and folklore that have to do with fish. Here are four of our favorite local Hawaii fishing tales.

Kula is a popular character in a number of Hawaiian tales. The talented fisherman used a pearl fishhook named Kahuoi and fished out of his canoe. Kula received a wife and had a son but they had to put him in a basket and abandon him since they were poor. The chief’s daughter found the boy. They were raised together and eventually married.

The chief’s daughter fell ill and wanted fish. ‘Ai’ai went fishing, but only caught a few fish. After his wife had become sick again, he searched for Kahuoi and took his father’s canoe out to sea. Aku leaped into the canoe as they did for his father and Kamanuwai once again appeared. This time, the bird took Kahuoi and never let it fall from its grasp ever again.

Does your partner’s snoring bother you and keep you up at night? Frustrating, right? Imagine hearing a sea full of snoring fish. According to Hawaiian folklore, hou live in shallow water and are small, colorful fish. To hear them snoring, you must venture out onto the still water on a quiet night with torches.

Hilu-ula and Hilu-uli were twin brothers and sisters born as humans. Interestingly enough, they also had the power to assume the form of a fish known as the hilu. Once the twins were older, Hilu-uli departed from her family and went on a journey as a fish to Heeia. As she journeyed, she multiplied the hilu population, and a huge school of them filled the water near Heeia. The people began eating all of the hilu. Hilu-ula appeared on the island and recognized the fish form over his sister being cooked. He was enraged and took on the form of a whirlwind, entering every house that possessed hilu and blew all of the fish back into the sea. Because of this, all hilu now have dark scales.

Embark on your own legendary adventure and book a charter with us for deep-sea fishing on the North Shore of Oahu. Take the first step in creating exciting new memories by calling us at 808-365-2520.