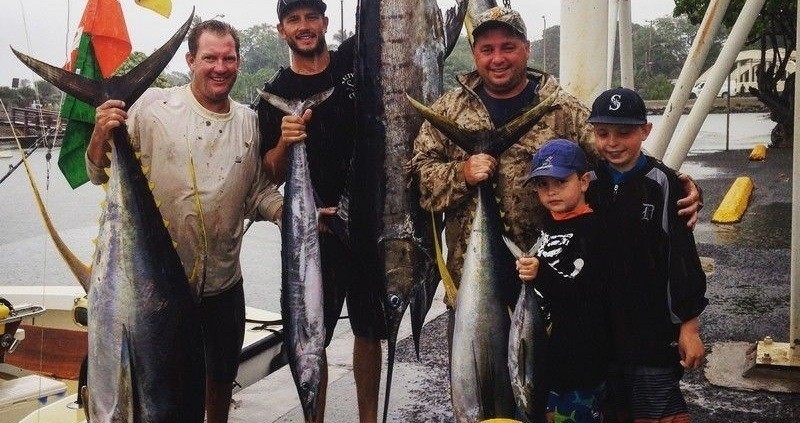 Stripe Marlin near Oahu usually shows up during our winter months. November through April. Our Oahu sportfishing charters typically catch them in the blind, meaning no birds indicating where the fish are at. Just trolling near north shore and all of a sudden, there they are! Singles or packs of up to four or five at a time is not uncommon. They are typically in the range of 40 to 100 pounds. They are the most aggressive of the Marlin species we have and will keep attacking and attacking and swatting and swatting at the lure until they are hooked or they just wear themselves out. Very exciting!
Because of their aggressiveness, we often will have a pitch bait ready and when they do show up we can pitch a live mackerel at them while reeking the lure away from them and get a much better hook up ratio that way and also hook them on a rod that’s more suited to their size which makes it really fun to catch.  That’s bait and switch. Striped marlin caught in Hawaii is also very tasty to eat. One of our favourites for sashimi and grilling. Like their cousin, the Blue Marlin they jump around a lot to try and get rid of what is irritating them.
https://www.fishoahu.com/wp-content/uploads/2022/02/dock-catch-marlin-3.jpg 800 800 Flyer Sportfishing https://www.fishoahu.com/wp-content/uploads/2022/01/logo.jpg Flyer Sportfishing2022-02-17 18:31:322022-07-23 02:24:48Hawaii Stripe Marlin Charters
Hawaii’s Best Mahi Mahi Charter