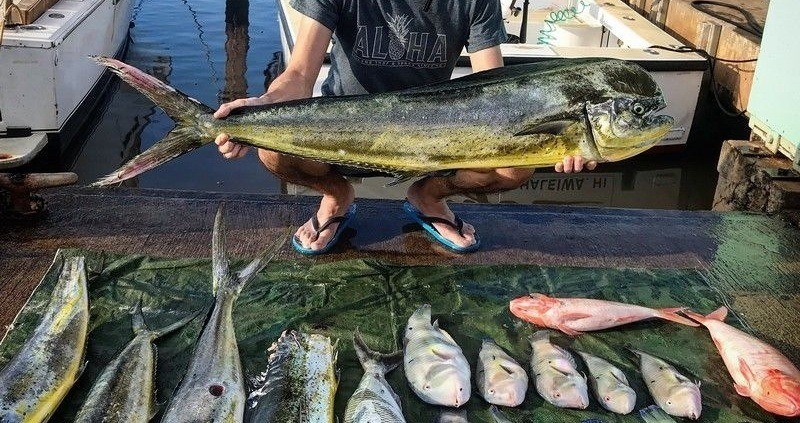 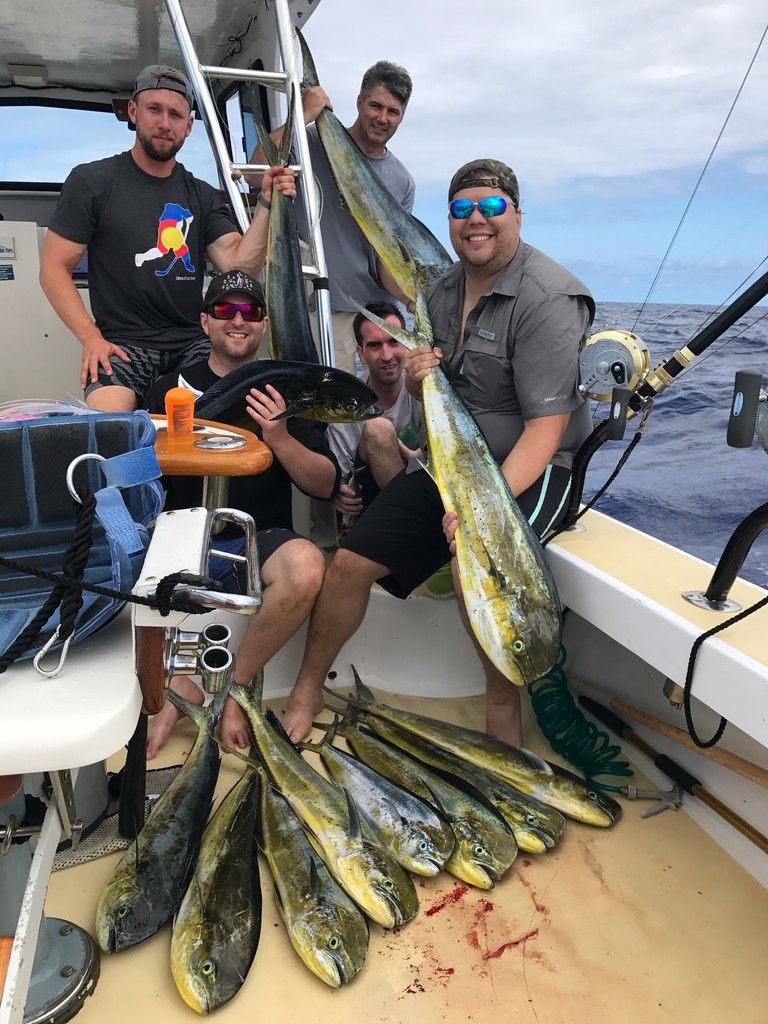 Over the last three months, we have focused our blogs on the various fish that are seen when taking a Flyer Sportfishing charter out for deep-sea fishing off Oahu’s North Shore.

Captain Jared Dow has reported that Yellowfin tuna are continuing to bite, Blue Marlin is in the area, and massive schools of Otaru skipjack tuna — in the 25-pound range have been spotted. Mahi Mahi — the focus of this month’s blog — has also b spotted.

Mahi Mahi, which means strong-strong in Hawaiian, is known as dolphin fish. The origin of being referred to as dolphin fish is unknown. However, it could be due to their size as they are close to the size of a small dolphin. Mahi Mahi is usually four-and-a-half feet in length and can weigh up to 40 pounds. They usually weigh an average of 15 to 30 pounds.

This fish is quite colorful. It is marked with a colorful palette containing gold, green, blue, and silver. They have multiple shades of these colors throughout their body. Mahi Mahi is also recognized by a long dorsal fin that runs from the top of their heads to their lower back. One way to differentiate between male and female Mahi Mahi is by the shape of their heads. The males have an obtrusive forehead, while the females have rounded heads.

Mahi Mahi is known to live near the coastline and in warm tropical and subtropical waters. They aren’t just found near Hawaii; they are common around the world. They live in the Caribbean Sea, Pacific Ocean, Gulf of Mexico, Atlantic Coast of Florida and West Africa, South China Sea, and Southeast Asia.

Mahi Mahi is known to feast upon a variety of prey including crabs, small fish, squid, other crustaceans, sargassum weed, and other plant life. On the other side of things, they are hunted by yellow-fin tuna, marlins, swordfish, sharks, birds, humans, and other mammals.

Another interesting fact about Mahi Mahi is their rapid growth. They are one of the fasting growing fish and reach maturity within their first six to 12 months of life. They usually live for three or four years. Female Mahi Mahi can lay 100,000 to 1,000,000 eggs two or three times a year.

To learn more about Mahi Mahi or to schedule a deep sea fishing charter for an exciting adventure in Hawaii, call us at 808-365-2520 or visit our website.