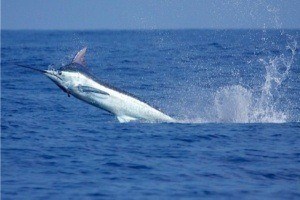 Blue Marlin is the best of the big game sportfish in the world by far. Pacific Blue Marlin are known to grow in excess of 1000 pounds and are caught year-round in Hawaii. There has been a grander size Oahu blue marlin caught every month of the year here in Hawaii. Oahu’s North Shore is the only place in the world I’ve seen blue Marlin school during our fall months, September and October. It doesn’t happen every year but when it does, it is the most exciting thing in the world. During our north shore fishing charters, we have had three on at a time jumping and going ballistic all over the ocean. Usually, there are some big females around and packs of males in the 150 to 250-pound class. The rest of the year our Oahu sportfishing tours have the opportunity to catch them all throughout. When the big yellowfin tuna show up there are also some big Marlin in the area as well that feed on them in May, June, and July. 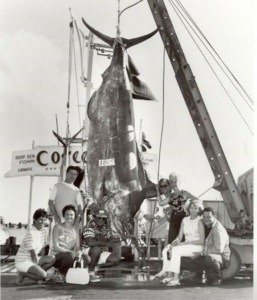 The world’s largest marlin ever caught in the world on rod and reel was a blue marlin caught here on Oahu in 1971 which weighed in at 1805 pounds and miraculously caught in a half-hour as she choked on the 100-pound tuna that was eaten prior to the lure she ate that became her demise! We typically see a handful of Blue Marlin over 500 pounds in a year and then our average size I would say would be in the 150 to 200-pound size. They are primarily solitary fish that our blue marlin charters catch mainly by trolling artificial lures, which is nice because whenever you have lures in the water, you have a chance of a World record size beast! Sometimes we find an area where they are more concentrated and switch to live bait, using mackerel or tuna. 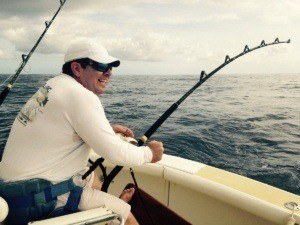 Marlin bites are super exciting as you’re watching the lures that are popping on the surface you’ll see them come up from the inside typically and stock the lure. Time stops as you wait for the attack, snapping the line out of the outrigger as all hell breaks loose! Once they feel the hook penetrate their mouth that is when you see them going absolutely nuts jumping all over the surface trying to shake that irritant-free as they tear the ocean apart! 20-40 minutes is the typical fight time with 4-1/2 hours being the longest battle I’ve been a part of. That one was 620 lbs and got tail wrapped and died. We had to get that one inch by inch from a few hundred yards down. The biggest I’ve caught was 1015 pounds which took an hour and a half! I’ve seen and lost bigger ones. One in particular still haunts me to this day…
https://www.fishoahu.com/wp-content/uploads/2022/02/trawling-flyer.jpg 900 1200 Flyer Sportfishing https://www.fishoahu.com/wp-content/uploads/2022/01/logo.jpg Flyer Sportfishing2022-02-17 17:30:292022-09-16 10:04:16Oahu Blue Marlin Sportfishing
Reeling in Oahu Aku Tuna