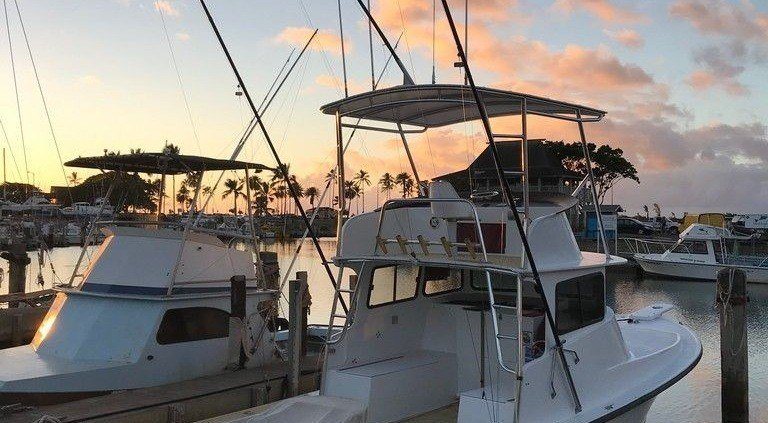 You planned it weeks ago, and are finally out on the open water. The gentle nudge of the waves against the boat, the open skies, the scenic backdrop of the Hawaiian shoreline, and the company of your closest friends makes for a memorable Hawaii deep sea fishing trip with Flyer Sportfishing.

We will accompany you during your excursion on the Flyer, our 31-foot Eastern sport fisher, to provide relaxed direction and assistance, helping you make an impressive catch.

We also make it a point to share information with you on your blog that will help teach you about some fish you may encounter on the water. Captain Jared Dow reports that billfish are appearing nearby.

Here are five types of billfish to look for on your next deep-sea fishing charter on Oahu.

One of the most coveted catches is a blue marlin. The blue marlin is the largest of all bluefish as they can reach 11 feet and weigh up to 2,000 pounds. They are characterized by cobalt blue shading on top and silvery white on the bottom. Blue Marlin sportfishing in Hawaii is plentiful. This billfish can be found throughout the world in tropical, subtropical, and temperate ocean water. They are also the only marlin that has rigid pectoral fins that cannot be folded.

A sailfish, which is found in warmer water, looks exactly how it sounds, as it has a high blue dorsal fin that looks like a boat’s sail. They are usually around seven feet long and grow rapidly,  reaching four to five feet in a single year. Surprisingly, sailfish have longer bills than spearfish.

The swordfish is known for its long, weapon-like bill, which it uses to hunt its prey. This predatory fish is the lone member of the Xiphiidae family. Similar to some sharks, they also have special organs that heat their eyes and brain, helping them better catch their prey.

The striped marlin is marked by a dark blue or black dorsal area and silvery white body, which is laced with cobalt stripes. It has a medium-sized bill, and its pectoral fins are more flexible than other billfish.

If you wish to book a half or full-day charter fishing charter on the North Shore of Oahu, or learn more about the various types of billfish you may encounter if you go fishing in Hawaii, we invite you to contact us by calling 808-365-2520 or by filling out our contact form.

Want to join the discussion?
Feel free to contribute!

Summer is the Season for Blue Marlin
Scroll to top